"Human Being as the Central Value" 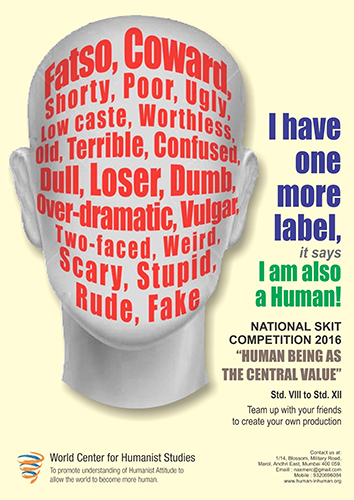 Today when profit and power are the most important things in society, human being is reduced to an object to be used and thrown. While all human being should be equal, today life of one citizen of a developed country is considered more valuable than lives of thousands of citizens of developing countries.

If we look at every norm, every decision and every action around us from the point of view of what is its impact on all human beings and not just a few then what we are doing is placing human being as the central value.

The topic has three sub-themes:

1 - Nothing above the Human-being

2 - No Human Being below another

Entries from schools were invited in the form of skits on the topic.

The competition drew phenomenal response. The skits reflected superb creativity, insights and reflection by the participants.