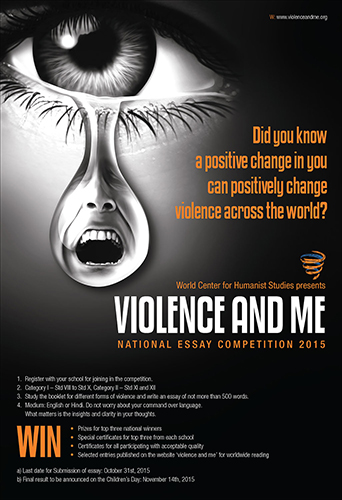 Generally, acts of war, terrorism etc. is perceived as violence. These are indeed acts of violence but they are not the only forms. In fact, most of the time, most of us are not directly exposed to such incidences. And that is the reason why many of us remain under the illusion that we are not directly affected by violence.

But the scenario will be very different if we understand what violence really means. What is violence? Anything that harms a human being or hinders his/her growth is violence. It can also be said that anything that makes a person unhappy is violence. Do we see ourselves, as also almost everyone around us, unhappy time and again? If so, then we are all victims of violence and often we are also responsible for causing it.

What is wrong in violence? Three aspects. One, the person who is subjected to violence is harmed, he is unhappy, and his growth is hindered. The second is that the persons who commit violence harms his own-self also. Try harming another person and deep inside you will feel bad. That is, you have done internal violence on yourself. And finally, the third aspects, is that violence breeds violence. Be it individuals, communities or even countries. When one faction is violent with the other, the other reacts with violence and an escalating chain of violence starts between the two factions.

How to deal with the violence? Obviously reacting to violence with violence is easiest and most common response. But we know by now that it is not the way out. It will result only in further escalating chain of violence.

The first step is to understand different forms of violence: Physical, Economic, Racial, Religious, Psychological, Moral and Internal. The second step is to start thinking about what would be a better response. Think about it and pen down your thoughts in the form of a small essay for this competition.

The more we learn the more we will be able to influence the world around us. That will be a small contribution of each of us for making our world more human and a better place to live for everyone.

Entries from schools were invited in the form of essays on the topic.

The competition drew phenomenal response. The essays reflected superb creativity, insights and reflection by the participants.

There were some incidences of straight copy from websites which we had to disqualify. Barring that the essays reflected superb creativity, insights and reflection of the participants.

The final results are as follows: